You know how it is sometimes. You do a bit of spring cleaning, or are looking for something, and you come across a no of photos that you took some years ago and the memories flood back.
This happened to me the other day, when I came across a no of photos I took during the pilgrimage to Taize that I took with the Luton University Chaplaincy in 1997 (I have posted some of them below, with explanation notes).
The memories are somewhat bittersweet now. A girl I briefly met there that year later committed suicide, a friend of mine who helped organise the pilgrimage died suddenly a few years later, and then there was the horrific murder of Brother Roger earlier this year. 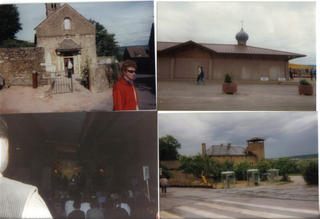 (Clockwise from left: The old Church at Taize, which stopped being the focal point after 1960, due to the sheer volume of pilgrims attending services. The main Church at Taize, which is mainly used by the pilgrims. The monks quarters. A bad photo I took of one of the presentations inside the Church. The one in the photograph was done by pilgrims from Pakistan, if I remember correctly)

But that said, my two pilgrimages to Taize (in 1996 and 1997), were fantastic experiences. The enviroment (I have always thought the South of France is one of the best places in Europe), the Church services, the variety of nationalities that you meet when you go about your duties (To be a pilgrim there you have to help with the upkeep. The group I was with helped with washing-up duties during the lunch hour. On one occasion I shared the washing up with one Austrian, one Czech, one French, and one German). 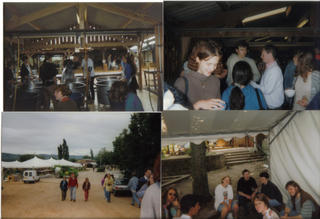 (Clockwise from left: Lunchtime washing-up in the main kitchen area. The evening meal. The Bible study group I was in (Embarrasingly we were all British, bar one Pakistani, one American, and one Belgian). Three of the Luton University group (From left, my friend Helen, my late and much missed friend Simon, who was Chapliancy Warden. Simon's sister, Jane)

Then there are the evenings where Oyak, the non profit bar is open and you can buy one alcoholic drink only and you get bothered by non-English speaking European teenagers who say 'Fire!' meaning, 'Do you have a light!'
The surrounding gardens, where you are meant to spend time in reflection are quite attractive as well. If the oppurtunity comes up to pay another visit I think I will take it. 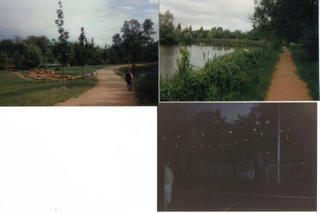 (Bottom photo, Oyak open for business. Top photos, the gardens at Taize. The rock pool shown in the top left-hand corner was a favourite spot of mine)
Email Post

Anonymous said…
This comment has been removed by a blog administrator.
1:27 AM