20 Nice things about the Cameron Tories ;) 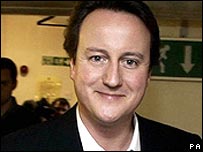 Further to a previous posting, I did promise this, so I might as well :/.

1) David Cameron is the MP for Whitney, which is in Oxfordshire. It is a lovely constituency and I am biased here, as I spent part of my childhood living in the village of Enstone, which is firmly within the constituency. Plus it was a Labour seat in 2000 ;)

2) They don't think much of the 'fanatics' in their grassroots!

3) They talk about consensus politics. That is fine as they seem to be reasonable people. I just hope that the other parties are seen as fair, and act fair, when they point out how damaging the Conservative Party policies are!

4) David Cameron champions the disabled and talks about being tough on enviromental issues. In the spirit of consensus I can happily point out that so are the Labour Party.

6)My MP endorsed David Cameron and I get on with him, although he has blotted my copybook on two occasions. One of which was initally backing Liam Fox.

8)David Cameron wants an end to yah boo politics! Thats fair enough, but political ideas also matter and people have a right to disagree where necessary, and as the Conservatives, Labour, and the Liberal Democrats are three different parties, that happens a lot.

10) Cameron says that Archer will not be allowed the Whip in the Lords. However it looks like Archer can still be a party member.

12) David Cameron is devoted to his family. How many politicans can say that! God alone knows the strains that being in politics causes. That said many MP's are devoted to their familes, but some clearly have not.

13) A Cameron Conservative is someone I would have a pint with. But then I would happily do the same with the Lib Dems ;)

15) I knew twenty was too many

16)David Cameron is a keen cyclist, as am I

18) A Cameron Conservative acknowledges that they need to change. They are just unsure how

Well that wasn't as painful as I thought :).
Email Post

Kerron said…
The best thing for Cameron is that he looks a bit like me. Fact.

Can't believe you missed that out.

Paul Burgin said…
lol. I obviously don't need to!
That said I was disapointed that you failed to get me, or Travis or Dave for that matter, a place in your Shadow Cabinet!
Good grief, what am I saying, so easy to get confused ;)
2:40 PM

Cameron dreams of being me. Fact.*