In Musical Praise of: John Lennon

Who else could I mention today!
It is very difficult to make a proper and accurate assesment of John Lennon and his work, and those who think they have (Bar possibly Yoko Ono and Paul McCartney, whom Lennon said in his very last interview were his two favourite collaborators) probably have not got it right. There is something quite chamelion-like about him.
This is the man who sung 'Imagine no possessions...' and yet his personal wealth was valued at about £100 million at the time of his death. The man who said that he hated the Beatles in 1970, and yet, ironically, was among the first to make positive noises about collaborating with the other three on the project that, years down the line, became the Beatles Anthology. He could write a song like All You Need Is Love and then write a song like How Do You Sleep! A song he came to regret writing.
But this is not so much Lennon being hypocritical so much as him taking a different stance on things at different times in his life. People grow and change and develop as they get older, and the problem with Lennon is that people take a particular image of him at a certain point in his life and stick with it.
So what would Lennon be doing at 65 if he were alive today? Well who can say! I suspect that he would still be living in New York, still living with Yoko, still having an occasional row with McCartney (albeit with a general warmth, compared to the problems they had in the early seventies. They found by 1980 that they could get on, so long as they didn't mention their business problems). There may even have been a full-blown, albeit short-lived reunion with the 'Beatles Anthology' in the 1990's.
He would have been offering his opinions on U2, Oasis, The Darkness, Britney Spears, Madonna etc.. in as much the same way he commented on The Clash, Queen, Kate Bush, the B52's, Bruce Springsteen, and Madness in 1980. And musically, well who knows!
So what do I like about his music. Well his honesty (even when I strongly disagree with him, which is often), his search for truth, the blues and ballads style that started with the Beatles (He could be as sentimental as McCartney (see Beautiful Boy), as McCartney could be scathing as Lennon (see Too Many People)).
His last work in 1980 is among my favourites of his. The sharp honesty and commentary is still there, but it is more gentle and pronounced, such as in 'Watching the Wheels'. Then you get the return-to-fifties rock and roll song (Just Like) Starting Over, the eighties Beatle-sounding ballad 'Woman', and finally (a song that he wrote and demoed less than a month before his death and which George Martin added an orchestral arrangement nearly twenty years later) the ironically-titled 'Grow Old With Me'.
So is there anything positive that one can glean from the anniversary of Lennon's death. 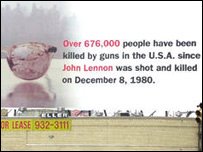 Well aside from his music, as much as I respect and can understand where the NRA are coming from, a proper look at the need for gun control in the US wouldn't come amiss! I think the photo on the left says it all!
Email Post

Kerron said…
In unrelated news, I sat next to your beloved Hannah Hedges today Paul.

Paul Burgin said…
What was the cause for that!
3:22 PM

Actually it was a prayer meeting if you must know - and you'll be pleased to know that I kept your dark secret secret.

Just remember she is a Liberal - and one day you could be on the receiving end of one of her dodgy Bar Charts:

Kerron said…
That is not meant to be a euphemism.
4:39 PM

Paul Burgin said…
I know, but it was for want of a better reaction. Don't worry though, I keep firmly in mind that she is not a friend of Labour!
4:43 PM