The One Second Condom 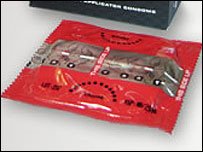 As we approach World Aids Day (Dec 1st for those who don't know!) it is usually a good time of year to highlight the importance of safe sex. Usually in some parts of the World many say that abstenence is perhaps best and I am inclined to agree with them, but that is a simplistic answer to a complex issue and given people's fascination with sex, unrealistic to expect. It also goes without saying that you cannot enforce morality and people who are sexually faithful are just as much at risk as people who are not!
So I am always cheered by the progress in highlighting the importance of teaching sexual responsibility, which includes the use of condoms. However, I am a little bit disturbed by this piece of news about a condom that is not on sale outside South Africa and which allegedly can be put on in one second!
Says the designer of this condom, one Willem van Rensburg. "Using an ordinary condom is a real pain, by the time the condom is on, the mood is halfway out the window."
Two things come to mind. First, surprise that someone could be so bored by sex that they lose interest just because they have to put on a condom, the second is that a condom that can be put on in one second just seems a bit, well impossible to say the least!
I think this is a proposition that will face some stiff opposition and may will come unstuck, and I am also worried about the possibility of people being taken along for a ride!(Seriously!)
Email Post

You don't actually believe that do you?
3:47 PM

Paul Burgin said…
To a certain extent! Was trying to use my words carefully for fear of causing unessesary offence (one of my failings I'm afraid and it looks like I wasn't so careful this time!), but if, say, a person who is faithful has a promiscuous partner, then yes, they are as much at risk if they are having a sexual relationship with that person!
4:04 PM

Praguetory said…
No offence taken, I just think the statement is wrong.

All other things being equal (such as partner promiscuity), a sexually faithful person is less at risk from STDs.

PS - I don't know who you were worried about offending. Mr Mbeki doesn't check this site out, does he?
4:47 PM