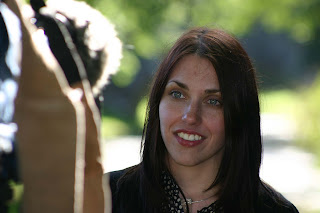 Heledd Fychan is 28 years old, and she is the Plaid Cymru Parliamentary candidate in Montgomeryshire.She lives in Cardiff, and is glad to be back in Wales after nearly a decade living in Dublin and then London. As you may have guessed from her name, Welsh is her first language and she often blogs in both English and Welsh. Her main passions in politics are rural affairs, culture and education. She recently spoke out about the issue of top up fees, criticizing every political party in Wales for not having a vision for higher education. Her blog is Pendroni

Heledd Fychan said…
Yes and ordovicious sorry! Forgot to mention loads of others too such as adam price and politics cymru.
6:08 PM

Anonymous said…
Nice blog. Only the willingness to debate and respect each other’s views keeps the spirit of democracy and freedom alive. Keep up the good work. Hey, by the way, do you mind taking a look at this new website www.indianewsupdates.com . It has various interesting sections. You can also participate in the OPINION POLL in this website. There is one OPINION POLL for each section. You can also comment on its news and feature articles.


Kindly go through the entire website. Who knows, it might just have the right kind of stuff that you are looking for. If you like this website, can you please recommend it to at least 5 of your friends. Your little help would help us in a big way.

Unknown said…
I live in Manafon, down the road from many events that your website (http://heleddfychan.blogspot.com/) shows you to have been present. I admire you for getting out and about in Montgomeryshire, however I have read that your home is in Cardiff. We are hardly on your doorstep are we, where is the local candidate born, bred or resident? If Plaid wants to make its presence shown, where have you been until now?
12:45 AM