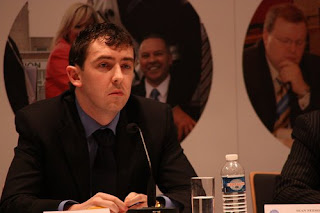 Daithí McKay is a Sinn Féin MLA and became the youngest member of the Assembly when he was elected at the age of 25. Prior to being elected as a local Councillor at the age of 23 Daithí was involved in aid work in the Palestinian West Bank, and has done work in Cuba, the Basque Country and Kurdistan.

He was elected in the constituency of in 2007 and in over 35 years he came closer to beating Ian Paisley than anyone before him, with less than 700 votes between them.

Last year he was involved in a physical confrontation with ‘dissident’ republicans in Ballymena, an incident which was captured by a BBC camera crew. He is one of the first republicans to take their seats on the Policing Board.

He is a strong critic of the north’s Environment Minister Sammy Wilson who doesn’t believe that human activity influences climate change, and he set up an all-party working group on Climate Change which he currently chairs. He also put forward a motion supporting the closure of the British Nuclear Power Plant Sellafield which was passed by the Assembly.

The first ever political awards ceremony in the north were organised by Slugger O'Toole in October 2008 and Mr McKay won the Up And Coming MLA of the Year award, beating off opposition from Simon Hamilton (DUP) and Basil McCrea (UUP).

I’ve always been a bit of a PR-geek and was our local party Press Officer for about 5 years so I saw the opportunity to use blogging as a form of communication to constituents. Like Twitter it also gives you an opportunity to colour your political ramblings with a bit of personality, something that you cannot always do in your standard TV and radio interviews, press statements, etc.

What triggered my decision to actually put aside some time and start a blog was being nominated for last year’s Slugger O’Toole political awards in . I think at this moment in time, especially after political parties and politicians have taken account of the way Barack Obama’s campaign was run, its suddenly dawning on everyone in political circles that massive opportunities are being missed by not having a significant presence on the internet. After the Slugger awards I caught on to the fact that I needed to pull my finger out and utilise the Internet better as a political tool.

That would be a difficult question to answer. I think the best blogging entries are those where you have time to sit down and articulate your opinions and feelings in some depth, which isn’t always possible given the obvious time constraints. One good experience from blogging is the feedback you get and a regular feedback I receive is in regard to my blogs on bringing the local Assembly up to speed in terms of having an effective internet presence and making the workings of it as transparent as possible online. I’ve had positive feedback on this from public and Assembly staff alike so I intend to continue pursuing that bugbear!

I haven’t really had one yet – touch wood!

My favourite is the entry I made on – “Whatever happened to Henry Hill?” It has nothing whatsoever to do with politics! I’m a big fan of the film Goodfellas and the entry talks about the real Henry Hill character and how he now lives off his fame in , feeding a drinking habit and cutting a particularly sad figure. The man was a drug dealer and people should view him as they do drug dealers here, not through rose-tinted glasses.

I could list you dozens of local political blogs I read here, Killian Forde’s page would be one of the better ones, aside from that Balrog would be pretty colourful (in its look and its posts). Outside of I like to keep abreast of politics in and , and in that regard Bethan Jenkins’ blog is worth a look-in.

I’ve always felt that the work I’m involved in is a vocation rather than a ‘career’ and some people I speak to don’t understand that. I actually took a pay-cut to become a local councillor in 2005 and struggled financially for a couple of years in that role but I didn’t mind. As long as I’ve some sort of roof over my head, have food on the table and working both to better people’s lives and to toward my political objectives I’ll be happy. I’ve always aspired for collective gain rather than personal progress in the political world and hope that I will always maintain that position. What inspired me to join Sinn Féin was all the wrongs that I saw in this society and the need to correct them. That and helping those who are in greatest need continues to keep me going.

With regard to the recent murders of two British servicemen in Northern Ireland, Martin McGuinness referred to the killers as "Traitors to the Island of Ireland", given the wording, is this a sentiment shared by many others in Sinn Fein?

The recent killings has done absolutely nothing to bring a united Ireland any closer and one of the main fears within the nationalist and republican community is that these killings will result in British troops being brought back to the streets and fields of the north and all of the harassment and conflict that we experienced here in the past being revisited upon us. Even republican commentators who disagree with Sinn Féin’s present strategy have admitted that the Good Friday Agreement signed in 1998 introduced human rights and equality safeguards and it represented the end of the state as we knew it. This opened up the way for republicans to achieve their objectives by political means and no-one supports the actions of these groups, they have articulated no strategy and have no idea what they are doing. Some of those involved in these groups in my local area are drug dealers and touts and I have no doubt that some state agencies are still involved in attempting to create conflict within the republican community using these informers. This is irresponsible given recent events and the British government needs to reel in its dirty tricks departments, for everyone’s sakes. Any organization that knowingly tolerates drug dealers amongst its membership will never under any circumstances be justified in using the name Óglaigh na hÉireann and serve only to sully the name of republicanism.

As Environment Spokesperson, what would you say Northern Ireland can give to the Worldwide debate about how to tackle Global warming?

Leadership would be a good start! That’s something the present Environment Minister is lacking in the Six Counties with his outdated views on the causes of Climate Change. Seriously though I think that Ireland is in an excellent position to build a strong renewables industry, especially given the potential there is for wave and wind energy here, and I think that it is unfortunate that the Scottish Government are ploughing ahead in this field whereas here Ministers are dithering. To be honest is miles behind a lot of other European countries in regard to environmental matters and we need to learn from initiative shown elsewhere as well as becoming a world leader in renewables – for which the potential already exists.

I’ve always wanted to go to and do a bit of diving with the Great White Sharks that they do there. and are also on my list of countries to see.

I was in the Palestinian territories doing aid work about 5 years ago and after seeing the attacks on over the New Year I was just itching to get back again to do something to help out.

Who do you regard as the best Sinn Fein leader, and, if possible, the best First Minister?

Gerry Adams and Martin McGuinness both have distinct attributes which have made them the leadership figures they are. Either of them would make an excellent First Minister or Taoiseach at some point in the near future! Aside from them John O’Dowd and Conor Murphy stand out as strong leadership figures.

I’ve never really had an individual person who inspired me to go down the political path I’ve gone down or do the work that I do. If I had to plug for one though, it would be Ernesto Che Guevera. An iconic figure of course, and is an inspiration because of his sheer selflessness and willingness to sacrifice himself for the benefit of other people. The same would go for the Irish hungerstrikers who gave up their lives for their friends and comrades within the prisons here.

Sylvester McCoy, haven’t watched any of the new ones.

AC/DC and I’m going to see them in next week.

In terms of visiting for the weekend, Dublin, Belfast, or Newry?

is far too expensive, would have to be .

, strumming the guitar and going to music gigs, working out at the gym and enjoying the occasional GAA match