Skip to main content
Labels
Posted by Paul Burgin May 31, 2009 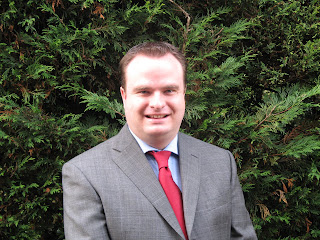 Christopher Aldous: Hi my name is Christopher Aldous aged thirty four and I write the blog We Don’t do God I have been very happily married to Jo for the last 4 years and Dad to three wonderful children Jord, Bethany & Grace. I am very strong advocate and believer that everybody no matter what walk of life they come from, what sex they are, or colour of skin or disability that they may have should have an equal chance and be given the same opportunities in life. This belief has been formed through my strong Christian faith of virtually twenty years and my active interest in politics over the last eleven years.
My family is my life and my friends bring extra joy to my day to day life.Out of faith, politics and family I am a passionate and addicted fan of Everton Football club. Depending on their results my mood can either be elated or foul for the next day or so. I also enjoy cricket to the extent I can watch a test match all the way through. Whilst away from sport computing and photography are newish hobbies of mine.

It is an interest I have had for a couple of years now, but until recently did not have a fresh idea for starting a blog. I didn’t just want to copy other blogs that had proved successful. I wanted then and want now my blog to initiate debate between like minded and non like minded people also.

The ability on a daily basis to read other peoples blogs on a variety of subjects, and their opinions too even if I disagree with them strongly.

Although not personally involved for me it has to be the Mcbride affair. For me it showed all the bad side of what politics can be negative and personal.

What do you regard as your best blog entrry?

I wouldn’t say I have yet. I am very much at a learning stage of the blogosphere. I have though various ideas of future blogs.

It was all a bit of a joke really. In the run up to the 1997 election my Manager at work was a staunch Tory and it drove a colleague and me mad as he would harp on about how great they were all the time. So my colleague and I looked in to Labour Party politics so we had points to argue back at our Manager and just to wind him up a bit further we became members of the Labour party. On Election Day we dressed our desk up in red balloons, streamers and Labour posters and rosettes. I am sure you can imagine our smugness when we went into the work the day after the election win!! So this is how I began looking into politics and it wetted my appetite and I continued then and took it more seriously.

Having recently started your blog, what are your plans for it?

I have some long term plans for the blog like a weekly features including green tip of the week & weekly news review but the art of blogging is you don’t know what is going to be at the forefront of the news from one day to another.

Having recently blogged about freedoms in , how long do you think it will be before there is democracy in the country?

Many years maybe not even in this generation, but there has been small insights into this happening, although a setback this week is that as I understand it blogs have been banned from China.

Which political figure has been your greatest inspiration

Not Really a Bond Fan.

Am I sad for not following Dr Who.

Sunday times, primarily for a day in the life feature

Amazing Grace – (The first verse describes my relationship with God)

Ashes by Embrace (Reminds me of 2005, a year where I married Jo, Everton finished 4th in the premier, won the ashes & Labour won a historic third term.)

The Shack by William Young

One hit wonder by Lisa Jewell