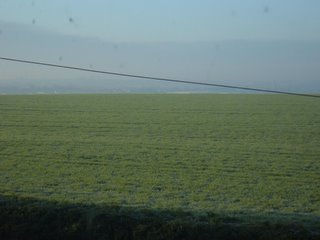 The photo I took from my bedroom yesterday morning.
You can make out the dark haze in the distance, which obscures some of what you can normally see in Baldock on a clear morning, as yesterday would have been.
And no, I won't be sending in my photo to the BBC. Aside from it not being that newsworthy, I was somewhat unempressed by one or two people from Belgium saying that they could hear the explosion etc..
Nor was I impressed by two amatuer documentary film makers going as close as possible, beyond the safety area, in order to get some footage. I could almost hear the subtext, 'If Sky won't buy the pictures, we contact the BBC!'
It's just a relief, as I said yesterday, that no one was killed and tomorrow will be yet another day!
That said, it will be interesting to find out what series of situations allowed this to happen and what harm this will do the the local enviroment!
Email Post