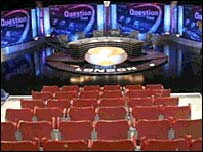 So here we are, as promised! The blog will be updated as the programme progresses.

10:38: Blair will go when he is good and ready. In good time before the next election and in full agreement with the Labour Party. Heseltine is having an attack of wishful thinking

10:40: Heseltine seems not to have done his homework

10:42: Whatever you think of Blair, you cannot avoid the success he has brought Labour and the prosperity he has brought the country. Hazel Blears is right, Labour is more than Tony Blair.

10:46 The hard left are not a threat. Blair and Brown both loathe them
Brown is similar, but different to Blair. It's called being human. We are all different. It is true that some who have abstained or voted against Labour will return to the fold under a Brown leadership

10:50: Blears is right. We have done much good. Clarke goofed, reshuffles happen, Piers Morgan is just being hectoring and rhetorical

10:52: But Blair WILL go before the next election!

10:55: It's no secret that Heseltine and Prescott can't stand each other

10:57: Note Heseltine did not refer to his own tenure as Deputy Prime Minister. Note also that Blears did briefly mention that in passing

10:58: Although she should have expanded on this!

23:06: Girl in blue blouse. Likely a CF member. All mouth, no back-up of arguments, just mild rhetoric and too young to remember what a Conservative recession was like!

23:09 I agree with Hazel Blears about a "wake up call" needed for Labour on the enviroment. But we do take a lead, look at our clash over the americans over Kyoto! Would Thatcher have done that!

23:10 Heat turning nicely on the Conservative Party's record of policy!

23:16 Now the discussion is about the official report into the bombings on July 7th.
Campbell is not making a proper point on what information is to be open and which is deemed too sensitive

23:18 Personally I think we were wrong to go into Iraq, but Piers Morgan, and an irate member of the audience in a pink shirt are simplifying the whole issue

23:20 Hazel Blears is right. No excuse whatsoever for July 7th. As one or two vociferous members of the audience don't seem to realise, the whole terrorist situation is more complex than Iraq!

23:26 Now the issue is on the claim for asylum from the Afghanistan

23:33 Both Campbell and Heseltine are right. Campbell in that their claim must be carefully looked into. Heseltine that the European charter on asylum must be reviewed

And that's it! Quicker than I thought and a bit exhausting, making notes and dashing to my computer and back again. But great fun!
Email Post

Anonymous said…
Hazel Blears is a disaster for us in Labour, she is not what we need to win the public round
11:31 PM

Anonymous said…
"Heat turning nicely on the Conservative Party's record of policy!"
Why, we're in opposition and you're in government legislating bad policy. We're having an extensive review of policies to ensure we get the right ones - not like Blair who makes bad policies off the cuff for headline purposes. I mean look at Blair's u-turn on education policy. Labourite policy has failed and now Blair is implementing Tory eduction policy to give schools freedoma and parents choice.
Labour got a drubbing in this Question Time - from reading your spin it doesn't look like it.
11:40 PM

Pot, kettle and black. Labour's record is only spin. Departments are now more about communication and to be seen to be doing something than actually doing something. This government is headline-driven and not about the long term good for the country.
11:46 PM

Paul Burgin said…
I did state a couple of times that I was less than happy with Blears take on things.
Plus as a party in opposition the Tories need a deeply intrusive look at their policies to see if they are fit to govern. Happened to Labour when we were in opposition, why should things be different for you!
11:46 PM

Anonymous said…
"Plus as a party in opposition the Tories need a deeply intrusive look at their policies to see if they are fit to govern."
We're doing that: the 18-month policy review. But while we're doing that we're sticking to our ideological principles that the state should respect and protect each and every individual's freedom and choice.

We also have a mandate to oppose this government, hold it to account and point it out its incompetences (some would say that we should also point out its hypocrisies as it was so self-rightous in the 90s)
11:53 PM

Anonymous said…
"All mouth, no back-up of arguments, just mild rhetoric and too young to remember what a Conservative recession was like!"

As I'm young, I won't quibble about what life was like in whatever..., but from what my dad says, the late 1970s wasn't that great - coming from a Labour voting family in Scotland he votes Tory, because of Thatcher. Like Mick Jagger once in aswer to a question about tax relief: "Thank God for Maggie Thatcher"

But you Labourites will never acknowledge that the current economic stability is based on all those years of necessary reforms and sacrifices.
12:17 AM

Tim Roll-Pickering said…
How do you define a full-term! It's relative!

Surely "a full-term" is widely taken to be four years?

Whitelaw was Leader of the Lords and also Lord President of the Council - as is Amos today. I recall Hezza had a lot of duties including some of the Civil Service stuff but can't recall too well.

Quicker than I thought and a bit exhausting, making notes and dashing to my computer and back again. But great fun!

Indeed. Perhaps unsurprisingly we have somewhat different views on Blears and Heseltine though!
12:53 AM

Paul Burgin said…
Tory, it's not just the Tories themselves who need to have an intrusive look at their own policies. The electorate and the Media have every right to ask tough questions, as do the other main parties. That's what happened to Labour in the eighties and nineties, why should it be any different for you guys?
As for being young and economic stability. I am very much to the centre right of the Labour Party (the sort who could have joined the SDP, but likely would have stayed behind to fight one's corner if I was of that generation), so I am not going to even defend our record then, although, as humiliating as it was, Healey going to the IMF was better than the Protectionist policies that Benn was advocating.
Given the long period of economic stability and growth (The Tories never managed that in the eighties, and God knows they had plenty of chances)under nine years of Labour, as well as Gordon Brown's prudence in avoiding the temptation to speed things up, I think Labour has shown they can be trusted!
8:47 AM

Paul Burgin said…
Tim
Officially, if you want to quibble, a "full term" is five years and about four weeks. Yet Blair said he would serve a full term and yet hand over and give his successor room space before the election, so Blair could quit around 2008 or early 2009, having served a "full term".
Hezza was very much a Deputy, and a powerful one at that, but he had no dept as such.
And with all due respect the House of Lords is NOT a govt dept!
9:21 AM

Tim Roll-Pickering said…
Maybe the Lords isn't, but Whitelaw had a clearly defined job, one that is carried out in the current Cabinet as well so I dn't think it far to drag him into comparisons with Hezza and Prezza.
1:01 PM

Paul Burgin said…
It might not be fair, but officially Prescott is still the First Secretary of State and his role involves Deputising for the PM and charing several cabinet committies.
Seems like a clearly defined role to me!
7:16 PM

Tim Roll-Pickering said…
Is it worth the same salary as when he was doing all that plus running a department and chairing some more Cabinet committees?

And will we see Prescott standing in at PMQs still? Or will Jack Straw do it instead?
7:27 PM

Paul Burgin said…
I think it will still be the same at PMQ's, although obviously Prescott will be having his head down for a while!
8:57 PM