England Out of the World Cup on Penalties. Again! 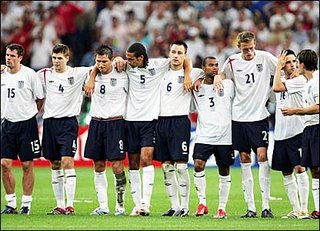 Well it was what some of us dreaded. Before the match, at the back of my mind, I was thinking "We will do it. It's Portugal for goodness sake! Not Germany! Not Brazil! Not Argentina! But Portugal"
But in the back of my mind I was bothered by our standard of play in the past few weeks, plus Portugal's style of playing, which has a lot to be desired.
Like Kerron, I was watching it at home with the family, and we quickly tired of John Motson and switched the commentary to BBC Radio Five Live. Nothing personal against the Motmeister, but he does have a habit of slipping into Colemanballs language and we just weren't in the mood for it.
Aagin, England were just not pulling weight. Yes it was humid over there, yes the Portugese played dirty, but it's not as if either was unexpected, and Wayne Rooney getting into a fracas seems to have been an accident waiting to happen. Remember his chucking his boots in anger at the dugout about a week ago, when he was replaced seventy minutes ino the game with Sweden? Like Beckham in 1998, he let his temper get the better of him and we all suffered.
In many ways it was a repeat of 1998. The foul behaviour of the Portugese players, the red card, the extra time and penalties (and why Erikson picked Lampard for one of the penalty players when he has never scored a goal during the World Cup, and seems to think that the crossbar is a couple of inches higher than it is, is beyond me) but maybe some of the England squad have now learnt the hard way we will do better next time.
We hope.
Still tomorrow is another day! :)
Email Post

Manchester University Labour Club said…
We didn't deserve to win that game. We would have got murdered playing Brazil or their like.
11:37 PM

BCB Webmaster said…
What is really disappointed is the cheating that is happening at the World Cup. In the last round, Thierry Henry won a free kick against Spain for a foul tackle but still clutched his face when he was brought down. I remember Brazil's Rivaldo did that in the last WC. I am sure I saw another player do it yesterday too. In the Brazil vs. France game, Ronaldo deliberately dragged his foot over a French defender and got the man yellow carded. Speaking of Ronaldo, as a Manchester United fan I am ashamed of C. Ronaldo. Quick to go down and even quicker to go moaning to the referee when there is a foul on a Portugal player. That reminds me of the way some players will wave imaginary cards as referees if there is a foul. Very unsporting. These guys have so much talent why do they need to cheat and be so intimidating?! Thank God for Zidane who showed what football is really about last night.

For what it is worth, I think England did deserve to win the game last night. And if they had put in that kind of performance with 11 men they would have given France or Brazil a run for their money.
7:38 AM

Kerron said…
Best John Motson plea for being retired was when he started talking about "West Germany's" great quarter final victory this week against Argentina.

What era is this guy living in?

Even Mark Lawrenson sounded disgusted with his commentary during the game.
1:34 PM

Paul Burgin said…
I agree to an extent Dunadan, but all the same, we could have done better. Rooney didn't have to stamp that player in the groin!
Kerron - I wish I could disagree with you as there is something of a national treasure about Motty, but I can't! :/
4:33 PM