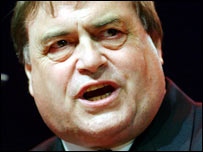 Whatever happens to John Prescott's career in the immediate future, I think that people ought to consider one incident at this moment.
It is rarely mentioned and does not involve sexual harrasment, taxpayers money, dodgy billionaires, casinos etc..
It is simply this. Iain Duncan Smith recounted recently that, shortly before the Conservatives kicked him out as leader, when there were unfounded allegations about his wife being improperly funded by taxpayers money, John Prescott came up to him in one of the corridors in the House of Commons and commiserated about the rumours, saying that this was going too far and that it was below the belt.
Prescott is not renowned for being friendly towards Conservatives, and he has behaved in an improper and disgraceful fashion in the past. But his words to Duncan Smith were an act of cross-party decency that he did not need to do and it should not be forgotten!
You see, (and I am speaking as someone who has been annoyed and disgusted by his behaviour, given recent evidence) what I am trying to say is that, like many politicians, Prescott is not quite the demon figure that seems to be seen as at the moment. He is a human being who made mistakes. Yes, mistakes which may or may not warrant his resignation, but mistakes that people should be careful about when they consider how to go about criticising him.
For example, many Tories and Tory supporters are rude about him, calling him a "fat oaf"! "A bully!" "Thick", "stupid!" "Lacking in talent!"
Well I can think of a few prominent Tories who fit several of those epithets well. One newspaper columnist recently attacked him using similar phrases as the ones I just mentioned. Funny! But the columnist in question has always struck me as a bullying oaf, lacking in manners, and holding political opinions that I find disgraceful. Pot = kettle. I would love to name him, but that would be uncharitable, unchristian, and making my above comments hypocritical. Perhaps I should be more charitable about the said columnist! ;)
I simply ask that people take a brief pause and remember that Prescott is human. As we all are!
Politics can be a lonely place, full of frightened people watching their backs. Some are nasty pieces of work who deserve to be run out, some are so decent it's incredible, and some start off well and end up mired in inappropriate behaviour.
But the Palace of Westminster can also be a place of consideration and thoughtfulness. So for those readers of mine who work there, whatever your political persuasion, whatever your views on Prescott! Next time you see him, just think of his kindness towards Iain Duncan Smith. I am not asking you to change your views or judgement on his behaviour or conduct. Just very simply, to ask that you see him as a fellow human being.
Email Post

Anonymous said…
I'm always amazed by the accusations that he's stupid. The man's got two degrees. For Tories to accuse him of being thick seems to be playing to a stereotype of wanton snobbery.

FWIW, I think he should go, especially in light of recent scandals though I've wanted to see the back of him ever since he decided to become the hammer of the FBU. But he has done some sterling work as Deputy Leader, like forcing a compromise over the current education legislation, preventing Blair from ditching the minimum wage from the manifesto back in 1997 and working with Brown to make sure the government stuck to its pledge to introduce it, and nixing the mooted coalition with the Lib Dems which would have enabled Blair to expel the left during his first term.
5:58 AM

Shaun (editor) said…
Whether he deserves it or not, this media witch hunt is quite harsh for including the unsubstantiated 'more mistresses' allegations with the more substatiated evidence that his 'dome' dealings have been corrupt.
But, on the other hand, it seems that it is only media witch hunts which force ministers to resign. Under Blair's government, ministers simply do not resign or receive the sack for grave mistakes, lies and abuses until the media have hounded them out of office. In the old days accountable ministers used to resign when they knew that they have become a liability to the government. It just doesn't happen anymore. Leaving aside incompetence, Prescott should have gone the moment he punched a voter.
10:29 AM

"Under Blair's government, ministers simply do not resign or receive the sack for grave mistakes, lies and abuses until the media have hounded them out of office."

What about Major's government?

I think we are all agreed though that some of the attacks on Prescott are unfair and beyond the pale.
11:25 AM

Shaun (editor) said…
In the old days accountable ministers used to resign when they knew that they have become a liability to the government.

Old days, as in the Profumo/B&W photo days.

It also took media witch hunts to force some ministers in recent Tory governments to resign, but it seems even more pronounced in the Blair government. Besides, my political memory doesn't stretch as far back as the Major years!
11:38 AM