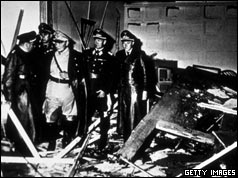 For many, many reasons, for the same numerous reasons as others, I deplore murder, I despise terrorism, and (admittedly agreeing with a smaller no here) have problems with the Death Penalty.
But there are exceptions, in that, I am not a Pacifist (I feel that sometimes to not intervene by millitary means causes more harm than good), and, in some extreme cases like the Nuremberg trials, I am not entirely averse to seeing someone sentenced to death and that action carried out (although I do question this!).
It's for the simple reason that some crimes committed are so horrific, so vile, so evil, you are at a loss to know what to do. Yes, pray for their soul (God knows they need it), forgive them, but justice has to be carried out too!
It's with all this in mind that I have every sympathy for those who heroically tried to kill Hitler sixty-two years ago today. I am not sure if they were right, morally or otherwise, for what they attempted, but they had very good and noble reasons for wanting him dead and I think they should be remembered for wanting to rid the World of a terrible evil!
Email Post