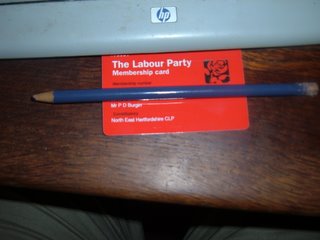 Well the weekend started with my NEC ballot paper coming through the letterbox (just when I was getting worried!), along with a shiny new membership card which you can see opposite.
I think it's the first Red Card I have seen in a while which has not involved a player being sent off a football pitch! ;). To think I supported France in that game because of Italy's cheating and corruption. Shame on you Zidane! Golden rule in such tournaments - expect the opposition to fight dirty, particually in games like football where they call you names and make outrageous comments because they want a reaction!
Still, back to the weekend. Both afternoons were spent in London meeting friends, which was cool! Although I am glad they repeated Doctor Who late on Sunday evening as I thought on Sat that I would miss the last episode. No spoilers, but Daleks V Cybermen was fantastic and the series ended on a brilliant cliffhanger!
And David Tennant's first season? Better than the Eccleston one and Tennant does well in the role and has made it his own. Kind of a cross between Tom Baker and Peter Davison methinks!
Email Post

Kerron said…
I should have used that cutting edge technology to obscure my membership number on my card too on the post I did!

Hope you will post a comment about whether you prefer it to the old one or not!
12:18 PM

Paul Burgin said…
lol!
You are not one of the most popular B4L bloggers for nothing are you! ;)
3:55 PM