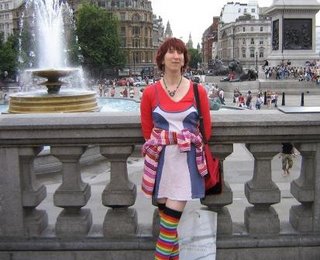 Lisa Rüllsenberg, was nicknamed this in honour of her heroine Willow Rosenberg (Buffy the Vampire Slayer). She was born in Nottingham and somehow has ended up back there. She has done a variety of jobs in teaching and galleries, mostly on temporary short-term contracts. She started her higher education with the Open University in 1990 where she met her partner Neil. She moved to Wolverhampton where she finished her degree and then did an MA part-time at Leeds. In 2004 she completed a PhD at Nottingham on art collector Peggy Guggenheim. Her blog is Rullsenberg Rules .

Rivalry! Seriously though, my partner Neil set up a blog Monday 13 September 2004. He emailed me about it that lunchtime. Apart from thinking his looked way better than mine and had great ambition (see his first post) by 8.45pm that same day (well, that's the declared time!) I had started. Besides, I was just too scared to upload my carefully designed and written web-site I had long worked on at home.

Getting mentioned in the Guardian for my remarks on the Tim de Lisle "89 essential albums" list! Not only did I go on to enjoy writing my own 89 albums list, but there was the added thrill that I got mentioned on November 19th. I was also thrilled with the 33 responses garnered by the Desert Island Discs post. And I would also add that I have really enjoyed meeting such great folk in the blogsphere. When JJ and Reidski recently came up to Nottingham and we were due to meet them, I kept getting strange looks from people when I said I was meeting friends that I had never actually met. It was the same with the Manchester blogmeet; and it was especially lovely to see Clare and EineKleine Rob there. Generally, people have been lovely and I have felt priveleged to get to know so many nice folk.

Spammers; people finding you from 'the real world'... the usual fears really. I'm also probably a tad too sensitive to be blogging really, as I can get upset by criticism, especially if I think it's ill-founded. It's one thing to have a different opinion, quite another to miss the point entirely or to just throw insults.

Apart from those mentioned above, I had a cranky rant on the topic of feminism in June 2005 and though I hate responding to those who play slap in the comments box, I did a follow-up post that really buzzed me. I like to drop in an occasional political/social/education rant even if they do bring out some pretty objectional opinions out from the woodwork...

When I did the profile for Normblog, I'd only just started out, but I regularly stroll all my blogroll and even track back to ones that are now defunct but still visible (or I remain in contact with them off-blog). Besides Cloud, JJ and Reidski are well-loved, as are all my other Robs and Bob-related blogs. I still love Kerron's great hair (as well as his blog!) and associates such as your good self Paul; Joe has been a great transatlantic buddy, and how Clare keeps going with all her talents and activities astounds me. The lovely George joined the blogging fun, Matt Crowder and the Fisking Crew are always good value, John's writing always amuses whatever incarnation he has, and Rosby has a great future ahead in screenplay writing. Still, despite all those and more, I have to admit I do feel deprived if there's nothing new from Marie at Struggling Author, Anna at "Theatre is Life", and MediumRob.

Okay, what is it about scotsmen (i.e. Douglas Henshall and David Tennant)?

Unsure. I do have a tendency to fall fast and hard over little details. A voice, a gesture, a bit of teasing. I'm a complete fool for good acting and the successful portrayal of slightly manic or off-beat characters with soft-centres, wounded souls, and broken hearts. Possessing a certain locale of Scottish accent (Glasgow-esque) does no harm at all either. Though each had crossed my radar previously and won attention, Henshall's portrayal of Dr. Daniel Nash in Psychos and David Tennant's of Det. Insp. Peter Carlisle in Blackpool were pivotal heart-winning moments. It helps balance my case though that Cloud/Neil has a long-term affection for Siobhan Redmond...

Changes every day, from early ("Twist and Shout") to late ("Julia") to mid period ("You're Gonna Lose That Girl"). Though for the great harmonies and vocals I'm a fool for the Beatles at the Beeb version the band did of the Phil Spector/Teddy Bears song "To Know Her is To Love Her".

What sparked your interest in politics?

I did A level Politics at 6th form. We studied local and UK politics and political structures in year one, and then in year two added in American politics. I was at 6th form from 1983-1985 so we had elections - just before and during our course, the miner's strike (which had significant local ramifications), the Brighton bombing, privatisations, and Live Aid just to name a few. And I was always interested in history which is inherantly political, in both an institutional and personal sense.

Germany. It's the birthplace of my father and I've never been. I keep meaning to do it. I really should.

New York. At any opportunity. I just love the city.

Who, excluding the present leader, do you regard as the best Prime Minister, and if different, the best Labour leader?

I have a residual respect for Attlee, just because of what that post-war government achieved so in lieu of thorough-going political analysis I'm going with that gut response.

Which public figure has been your greatest inspiration?

Depends what you mean by public figure: good writing always inspires me - from Hannah Arendt to Simone de Beauvoir, from Aaron Sorkin to Joss Whedon. In fact, on that last one, I'll re-promote Whedon's speech for "Equality Now" which is both funny and brilliant. That's the kind of thing that inspires me.

Come on! You're just TRYING to make this difficult! Though I have residual memories of Jon Pertwee, Tom Baker was my Doctor Who growing up so that period of DW still touches me. But Eccles-cake (TM: Stu_n) did bring it back to to popularity and for that thrill of seeing it return we say thank you (even if RTD seemed to have far more fun then Eccles did). Still, I would get killed for fibbing if I didn't say David Tennant inhabits the role spectactularly well. At his best, he is by far and away better than any other Doctor, even Tom Baker. When he's not so good, he's still watchable (nothing at all to do with being quite inherantly Jarvis-esque sexy...)

Can I just keep reliving the Pulp gig at Highbury Garage in 2000? Stroking Jarvis's feet on the front row, getting his end-of-gig ciggie, meeting the band - bliss! Otherwise, for something NOT seen, Dylan at the height of his powers

It drives me mad at times but still The Guardian. I started reading when I started 6th form (having grown up on the Daily Mirror) and haven't stopped yet.

Reading, watching too much TV/film, blogging.

I still get the tingles from Pulp's "Common People", Bruce Springsteen's "The River" has a similar effect and because I'm in a romantic mood I'll go for The Beach Boys "God Only Knows". Of course, three doesn't get close to being representative of all the great music I love, but those three will do. In terms of books, I'd like to get away with asking for both the "His Dark Materials" trilogy by Philip Pullman, and the 10 volumes of Neil Gaiman's The Sandman as each counting as one. But if that's pushing it and I can only have the Pullman, I'll add in both the Collected Dorothy Parker and Danielewski's House of Leaves. I happily re-read all those. Across that lot there is art, philosophy, politics, history, theology, horror, romance... everything.

Lisa Rullsenberg said…
PS I forgot to add in all the links (I wasn't well over the last couple of days) and if you want a non-copyright image - ie actually one of me - I could send one through...
8:54 AM

Paul Burgin said…
If you could send a non copyright image, that would be cool! I tend to find checking photos for copyright etc to be a bit of a minefield!
10:14 AM

Praguetory said…
Hey Lisa, you've got the same name as that weirdo in fancy dress in Nottingham.
10:14 PM