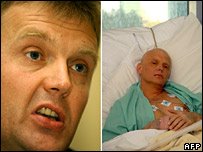 It was sad, but inevitable I suppose, that Alexander Litvinenko died last night.
But it was not before he denounced those he claimed were responsible, and yet I honestly don't think we are any closer to knowing who was. It goes without saying that whoever did decide to assasinate him knew exactly that it would be difficult to detect the poison, that it would be a painful death, and that they themselves would not get caught!
For me, the suspects are down to three. Either a) The FSB was responsible, with or without Putin's aquiessence or b) it was the work of a possible dissident rival or c) (possibly mingled with b) ), it was the work of person or persons wanting to discredit the Russian government and in particular the FSB!
If it was a) then not only was it an evil and immoral act, but also downright stupid, because those assasinated invariably end up martyrs. Al Qaeda recognise this and that it why they prize the culture of death so much! Litvinenko's death will also shed an unfavourable light on them and affect some of their standing in world affairs, peacemeal by peacemeal.
If it was b and/or c, then they will not have been all that clever and, rest assured, they will probably slip up before long and get caught.
Email Post