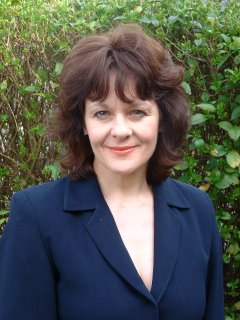 Ellee Seymour is a freelance journalist and press consultant. Her clients include Robert Sturdy MEP, as well as his son Julian who is standing as a Cons candidate in the new constituency of York Outer. She also works for small businesses and is developing blogging as an additional PR tool. Last year Ellee was the Eastern Region Press Officer for the Cons Party, working closely with candidates in marginal seats.

I met up with someone called Geoff Jones in February at Cambridge Toastmasters who had organised a social media conference the previous year, the first in the country, will top international speakers, and he set me up with a blog. Without his encouragement, it would probably never have happened, and I've never looked back since, it's been so much fun.

It would have to be when I discovered that David Miliband's blog cost £3,000 to set up, while Boris Johnson blogs for free. That post was picked up by so many others, it was my first post that gave me some recognition.

It happened this week when I accidentally deleted a post I had spent considerable time researching, I thought it was lost for good, but fortunately I managed to retrieve it, albeit without the comments.

There are a couple of recent examples I could mention. I wrote a post about a very genuine family who had been turned down as foster parents because they used the words "white immigrants" to describe some Eastern Europeans, which was deemed "inappropriate" language by social services. The story was picked by the national press and regional TV and radio, proving how blogs can be influential in getting information across. I heard about it because the man involved had visited my husband to buy a fishing reel and mentioned it when he was leaving.

I also wrote a post in Russian with my message to President Putin following the death of Alexander Litvinenko (using online translation) and had the most amazing response from Russian bloggers. It proves that language is no barrier, we can reach out to anyone in the world via the blog, they will find us.

Having met some of the political bloggers, it is now more interesting to read their posts, such as Croydonian, Dizzy and PragueTory, though naturally Iain, Guido and ConservativeHome get hits from me every day too. I also enjoy Nourishing Obscurity because James packs so much varied and interesting info into a day's posts, as well as Sicily Scene, where it is such a welcome diversion to read about Italian life, to see all the lovely food they eat there compared to the convenience foods and chicken tikka masala which we tuck into here.

It just evolved and I found I became passionately interested and fascinated by its mechanics. Politics on all levels involves people and making a difference to their lives which is what I find so important.

What are the pros and cons of being a Press Officer for an MEP?

So few people understand the European Parliament, I feel it is essential to communicate what happens as around 70%- 80% of our laws and regulations originate from Brussels. The only disadavantage is that my MEP Robert Sturdy is always so busy, I wish we could meet up more often. Working for him keeps me on my toes too as I have to be up to date with international news, as well as local.

Rupert Brooke said that "Cambridge people rarely smile, being urban, squat and packed with guile", and I can understand what he means. The "town" and "gown" side are very separate, but I love the thought of so many brilliant brains packed into the city, all those wonderful discoveries that have been made by so many clever people, like Crick and Watson. And the colleges are quite fabulous, and accessible to the public. I really must visit the Scott Polar Institute in the New Year and learn about their global warming discoveries.

Which political issues interest you the most?

Environmental and social justice, as well as health and education.

I visited Rome briefly in the summer for the first time and was knocked out by its beauty, how the archaeological sites are so central, how cheap it is to eat there and take taxis. I would love to spend more time in Rome, as well as exploring more of Italy too. I would also love to spend more time in Greece and visit all the islands, I am half-Greek and love its culture, music, food and people. I have saved 10,000 airmiles over the last few years, but I'm too busy to use them!

Who, excluding the present leader, do you regard as the best Conservative Party leader, and if different, the best Prime Minister?

I admire Disraeli who clearly had his finger on the pulse with his timely social reforms.

Which political figure (apart from Margaret Thatcher) has been your greatest inspiration?

Favourite Bond movie?
I loved Casino Royale because I thought Daniel Craig was a much meatier Bond, as well as very sensitive, i.e. the shower scene.

I used to find Dr Who very scary as a child, I really enjoyed watching the modern versions with my sons and thought Christopher Eccleston was great.

I love live music, but prefer smaller venues where you can get up and dance as well as enjoy the music. I would definitely love to see a salsa band like the Buena Vista Social Club.

Oxford, where my husband proposed to me.

I spend less time on them now due to blogging, but they are playing the clarinet, walking, swimming, gardening and visiting country homes and gardens. I would love to do more scuba diving too.

Anna Karenina, by Tolstoy
Zorba The Greek, by Nikos Kazantakis
Schott's Original Miscellany (such a mine of fascinating info)
Email Post

Geoff said…
Great answers Ellee and many thanks for the mention. It's been a great privilege helping you along your blogging career.
11:51 PM

Paul, you've been tagged btw, just in case you get bored over Xmas.
7:50 PM