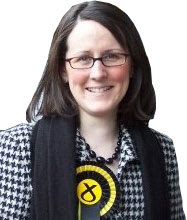 I knew a couple of people in the SNP who had started blogging, and the idea interested me. I thought it would be a good way to articulate what I was feeling about any issue on any given day (a useful skill in politics), and to communicate with anyone who was interested.

People contacting me through my blog, either to state their support or ask how they join the SNP and help campaign for independence.

Nothing too bad. There were some rather bizarre comments left by somebody from a political party that it’s best not to mention. I ignored them, and they went away...

That’s not for me to say.

My favourite blog is my friend Anne’s blog – IndyGal. Her blog really is a window into her life, and a good mix of politics and random stories about her life. Anne always has a story to tell!


What inspired you to go into politics?

I care. It’s as simple as that really. I was compelled to get involved, and to campaign for issues I believe passionately about. Scottish independence is one of those causes, but my interest in politics was initially sparked by concern for the environment and disgust at the huge levels of poverty that exist across the world.


The SNP have now been in government in Scotland for nearly two years! From the perspective of a Party activist, how has this affected your view of Scottish politics now that you are "doer's", and where do you think there are advantages to the Scottish Executive's relationship with the UK Govt..?

I think the election of the SNP Government in May 2007 was indeed a political earthquake, and it took many party activists time to get over the shock of finally being in government! There has been a great sense of excitement in the SNP since we became the Scottish Government, one grounded in an overwhelming sense of responsibility. We won the popular vote in 2007, which was no small task given Labour’s historic electoral strength and an almost universally hostile media. People in Scotland trusted us to look after their best interests and to make Scotland a
better place to live. I’m happy with the progress the SNP Government has been able to make, despite the constitutional and financial constraints they face as a devolved administration.

I’m not exactly sure what you are asking with regards to the relationship between the Scottish Government and UK Government. I personally look forward to the day when the government of an independent Scotland is able to have good working relationships with governments across the world, and particularly with those that currently constitute the UK.


Is socialism in Scotland well and truly in the ascendant?

I think the current recession has highlighted the problems that the capitalist system creates, and people are starting to think more critically than before about how we can collectively build the kind of society that we want to live in. Time will tell whether or not that translates into greater support for the socialist or social democratic model.

Plenty of places – but Russia immediately springs to mind.

I think they all had their strengths, but for me Henry McLeish was the First Minister who had shown the most promise. He seemed to be more willing to stand up to Westminster to defend Scotland’s interests. He was never given the opportunity to show what he was really capable of achieving.
It’s difficult to judge who has been the ‘best’ SNP leader, because they are each products of their time and circumstance. There is no doubting Alex Salmond’s exceptional skills as a politician though.


Which political figure has been your greatest inspiration?

No one person has inspired me. People that inspire me are not necessarily politicians, but ordinary people across the world who are standing up for what they believe in – often in very difficult and dangerous circumstances. So many people make personal sacrifices that never make the headlines.

Without researching the delights of each location, my instinct is to say Oxford.

I don’t have a favourite – see answer above regarding the SNP Government!

Being involved in politics doesn’t leave a lot of time for hobbies;
politics fills the time that would be available for hobbies. I like watching TV to relax – especially Heroes, which is back on our screens!

These are tough questions, but three of my favourite songs are:
‘Burning Love’ by Elvis
‘Different Drum’ by PP Arnold
‘Hysteria’ by Muse