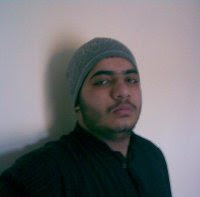 Irfan Ahmed: I am a 17 year old Lib Dem blogger and a member of the party since December 2007. I am currently I am a student at College studying ICT and politics.

I want to express my opinion and commentary about politics locally and nationally. I intended to amuse a dozen or so people a day but readership has grown since and currently is a couple of hundred people a day.

Being known by many high profile people as a blogger and being spotted out in an audience by Gordon Prentice MP for being "Irfan Ahmed".

Being accused of being a homophobic and anti Jewish after I made comments on my blog that were made without thinking about the consequences or thinking about what I was blogging. With blogging it comes with the territory, you need to be able to take rants and attacks at you by other bloggers and commenter's.

I don't think I have written my best blog entry, personally I think they are all my best entries.

I read many blogs but some of my favourite include Recess Monkey, Iain Dale's Diary, the former Pendle Truth and PoliticalBetting.com

I am not in politics, I am actually on the sidelines and poking fun at politicians and giving my commentary of whats going on in the world of politics on my blog.

How did your blog in support of Lembit Opik come about and why are you a fan?

It came about after Lembit Opik was not invited into the shadow Lib Dem cabinet at the last reshuffle by Nick Clegg MP. The whole point of the blog is to promote Lembit so one day Nick will realise he needs Lembit and invite him back into the winning team.
I became a fan of Lembit after seeing his bid for President of the Liberal Democrats which I supported as I still believe he is the right man for Lib Dem president.

You also run a blog on worries people have of a Tory government. Do we take this to mean that whatever you think of Labour, you prefer a Labour government to a Conservative one?

I believe that Labour need a coalition with the Lib Dems which will organise them and make them into a party that can benefit this country, something they currently are not doing. I think the Conservatives are the party of the devil and if they were running the Country they would run it down like Margaret Thatcher did!

I haven't been to the USA and would like to visit the states and blog from the Oval office!

I can't choose which country I would revisit so I shall mention both, Pakistan because its my where my parents are from and its my second home after the UK and Saudi Arabia as its a wonderful place to visit especially for pilgrimage

Muhammed Ali Jinnah for his determination to create a Country for Muslims in Asia which today stands as the Islamic Republic of Pakistan.

London and maybe some sea side town!

I don't read papers, I rather read blogs and support fellow bloggers with increasing their readership then buy a newspaper. Blogs are cheaper to read as well!

The Quran and that's about it, don't get much time to read books especially when your a blogger!