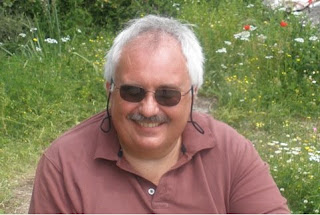 Peter Ryley is fat. He likes being fat. He once tried being slim. It didn't last. What did last was giving up real work to go back to education.

He picked up a BA in Politics and Contemporary History at Salford University and then embarked on vast amounts of self-financed part-time postgraduate study with an MA in Peace Studies from the University of Bradford and a PhD from Manchester Metropolitan University in the history of Anarchist ideas.

Peter's work has all been in an increasingly besieged adult education, in urban Manchester, rural Derbyshire and North Yorkshire, and now in Hull at the University of Hull's Centre for Lifelong Learning. In his twenty-seven years of working in adult education, he has never been promoted.
He blogs at Fat Man on a Keyboard and contributes as Gadgie to the Drink Soaked Trots

I thought it would be fun after a couple of letters of mine to UCU were posted on Normblog. It was a form of self-indulgence that suited my propensity to make big speeches.

This is really difficult. The one that got the most attention lately was Reading Gaza, which was posted on the Drink Soaked Trots, rather than my own blog, though there was a follow-up on Fat Man. Best to look at the two together.

I started making a list of those that I really like, some of whose authors I have had the pleasure of meeting and sharing the odd drink with, but then the list started getting too long. Sorry pals, you all deserve a mention, but I am going to just name the two that tell you all you need to know about the state of the nation:

I am not sure if I ever have really, at least in the organised sense, though I was once in the same ward party as Hazel Blears. I think that I have affected more lives through adult education than I ever could have done through formal political activity and that has been the instrument of my politics. Underlying all is a deep rage at the unnecessary cruelties of an unjust world and a dream of the possibility of something better.

A better question is whether it ever had life. In my view it was still born. I see New Labour as a colossal mistake based on false premises. Labour embraced Thatcherism at the very moment of its demise. As it clasped the mouldering corpse close to its chest, I stared in incomprehension at the ghastly spectacle. And then I realised, they were not administering a futile kiss of life, they actually were necrophiliacs. All the disasters of today spring from that original, mistaken genuflection at the altar of conventional wisdom.

Given the postmodern culture we live in, do people treat Education with the same respect as they did, say fifty years ago?

First, I don't think we live in a postmodern culture. Second, fifty years ago, I was only six so I don't know much about respect for Education then. I have met nothing but respect in my work. I think the most important issue is the lack of respect that educational institutions show to people. What we call a lack of respect is often a defensive reaction to social exclusion. Then again, amongst the young, it could be simply the result of our strange idea that we should be stuffing academic knowledge into people undergoing puberty.

I would love to follow the British Rugby League team to (but only when they improve a bit).

Yes, and I do every time I can. A beautiful place in , the .

Excluding the present incumbent is hardly necessary! Attlee is the obvious choice. This is not only due to what was achieved, but also to the circumstances that were faced at the time. Don't forget, too, that he wasn't alone; he presided over a talented cabinet. The contributions of two working-class autodidacts from both left and right, Bevan and Bevin, are especially notable. The vision and courage shown in the face of the colossal task of post-war reconstruction is a stark contrast with the vacuous timidity shown in better times.

Inspiration? That is hard. Because I have read much history of radical movements the people who take my breath away are the ones who appear in glimpses - fascinating, brave and obscure. They often inspire more than the leaders or the famous. So I would name Selina Cooper. You may not have heard of her. She was a working class woman activist from Nelson, living from 1864-1946. That there is a full biography of her is due to an encounter between the historian Jill Liddington and her daughter when researching the history of the women's suffrage campaigns. The result is one of the finest biographies I have ever read, The Life and Times of a Respectable Rebel. Neat way of sneaking an extra book in as well.

I don't like them. I liked Doctor No when it first came out, but I was an adolescent.

I am old enough to have seen the first series. I didn't watch it again, so there is only one Doctor Who - William Hartnell.

I tolerate the Observer and despair at the Guardian

Blogging obviously; reading of course; going to ; trying to learn Greek; entertaining friends, especially on hot summer nights on the patio in .

These are not necessarily favourites but are significant.

First is the song I want played at my funeral - Jollity Farm by the Bonzo Dog Doο Dah Band - and you all have to sing along! Second, it has to be Mahler's Urlicht from Des Knaben Wunderhorn. Finally, I need something that symbolises . So I have chosen the classic, Συννεφιασμένη Κυριακή.

I shall stick to novels. I love the philosophical novels of Milan Kundera and I have read The Book of Laughter and Forgetting three times. Melodrama and together? Captain Corelli's Mandolin is hugely enjoyable. Some of the history is dodgy, but the theme of the power of unconsummated love is wonderful and the picture of a Greek village is memorable, as is the revulsion at the horror of totalitarianism. It is very flawed, but a favourite. And then it has to be Hardy and his 'great hammer strokes of fate'. With my job I should pick Jude the Obscure, but I would really choose Tess of the D'Urbervilles. I can't read Hardy without weeping. Bitter tragedies rooted in sustained anger at social injustice. Wonderful.