Torchwood - Children Of Earth. A Review

Having now watched all five episodes I have to say that was one of the best stories Torchwood/Doctor Who have done, although how Torchwood can do a fourth series may well be problematic and they will have to work from scratch.
That said it was certainly one that chimed with the current themes of cynicism with the established order. We saw government and millitary display a shocking abuse of human rights and, behaving little better than Nazis, were prepared to sacrifice millions of children to a life of suffering so as to be left in peace. In fact I would go as far as to say that the punishments meted out to those responsible at the end (if any punishments were meted out), were pretty mild compared to what justice required.
As for Captain Jack Harkness, I suspect I am one of many fans who can say that my opinion of this character has gone downhill in a dramatic fashion. A man who is prepared to sacrifice his own grandson to a vicious and painful death for the greater good, is as corrupt and evil as the people he is fighting against. I suspect Russell T. Davies added this twist as a way of fleshing out further, Harkness's character, but it wasn't necessary and has permanently affected the development of Capt. Harkness and any future plot developments involving him. Its also turned Captain Jack fans away, possibly permanently
But apart from that. Absolutely brilliant. Eight out of ten.
Email Post
Labels: Captain Jack Harkness Children of Earth Doctor Who Torchwood

Anonymous said…
If Jack is corrupt than what about the Doctor?
4:19 PM

remisser said…
You don't speak for me... I still love Cap'n Jack. :) Think rationally: If 10% of all the worlds children were about to be taken... would you just let it happen or sacrifice your child? If Cap'n Jack had just let 10% of the worlds children die, I think he'd be seen as more of a villain. He made the tough decision... the only right decision... to be made in the story. Any normal human (except you, lol) is able to figure that out. :)
12:25 AM

Skunque said…
So being selfish is morally preferrable to acting "for the greater good"?

The decision wasn't made lightly with Jack, and I don't think it's in any way inconsistent with his established character. The difference was that the stakes were higher.

I loved CoE, and I've had no problem voicing negative opionions about TW or Who when they've fallen flat, been horribly unbelievable, or were just silly. CoE wasn't perfect, but far, far exceeded my expectations.
4:49 AM

Paul Burgin said…
I am not saying what I did on behalf of all fans and I ought to point out that I don't hate Captain Jack. I just feel he could have done better than to fry his grandsons brain and we have never seen the Doctor do such a thing to a defenceless individual. Lets also not forget that acting for "the greater good" is what the government and the military did in Children of Earth!
4:21 PM

Andrew said…
I started writing a response to your post and the comments, but then it became embarassingly long to post as a comment (people might talk) and I thought I had better just put it on my own blog.

This however was my conclusion: CoE succeeded where much of previous Torchwood has not because it was great drama with believable character motivations (regardless of whatever else was or wasn't believable, when character motivations are believable it is not hard to suspend disbelief on other matters). That CoE was about an extra-terrestrial threat, and a group of established characters merely provided a convenient setting for a brilliant thought-provoking drama. This is the way round it should be. The contrivances were put in service of the drama, rather than the drama in service of the contrivance. When Russell T Davies gets this right, he is an outstanding dramatist - as was shown in the Christopher Eccleston series of Doctor Who, but sadly only rarely since then.

If you want to read the rest of my post, which does respond to some of the original post here, and comments you can see it at notreallyrelevant.blogspot.com.

Anonymous said…
I don't agree about losing respect for Captain Jack. I do agree that nobody has the right to sacrifice others for "the greater good", but I think there's a difference here in that his grandson would have died anyway. The alients would have taken the 10%, come back and demanded more, and then the Earth would have been finished. There was no scenario in which his granson would have lived. In this particular situation, I think that Jack realized that his granson was dead no matter what and his death might as well mean something.
3:45 AM 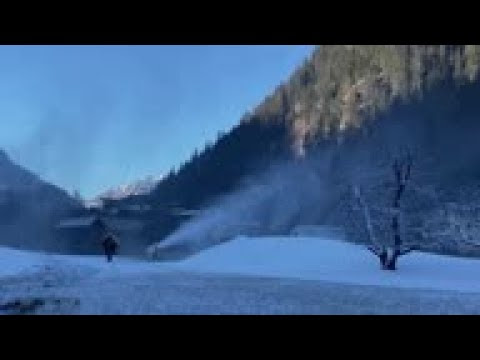 Brits Among Skiers Held in Quarantine in Austria