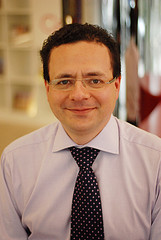 Mark Pack ran the Liberal Democrat 2001 and 2005 internet general election campaign and is now Head of Digital at MHP Communications (www.MHPC.com). He is also Co-Editor of Liberal Democrat Voice (www.LibDemVoice.org) and blogs himself at www.MarkPack.org.uk covering a mix of politics, technology, media and history. In amongst the 17 books he has edited or written for, he has co-authored two electoral law guides and he has served on the Electoral Commission's Political Parties Panel for nearly a decade. He eats chocolate.

What made you decide to start blogging? Many years ago I used to be a very regular writer to the letters pages of newspapers and magazines such as The Guardian, The Times and the New Statesman, so the switch from letters to blogging has been a natural evolution. However, when blogging first arrived on the scene I was working for the Liberal Democrats and therefore somewhat restricted in what I could appropriately say in public. As a result initially my blogging was fairly limited. Helping others with their own blogs did certainly wet my appetite to do more blogging, and so when I switched jobs last year I took to blogging much more heavily.

Yet to come, I hope: much like many a budding journalist I hope one day to break a story that has a significant impact on the world beyond the blog.

A decent idea for a post ruined by the foolish headline I chose. It was about the local election results a few years ago when I highlighted how the Liberal Democrat losses were concentrated in a small number of areas, but I made it sound like a plaintive plea for part of the country not to exist.

Before the general election I gave a speech at Nottingham University about the internet’s impact on British politics which in a slightly expanded version subsequently went up on my blog. I have picked this post both because it encapsulated a lot of my thinking about the internet over the last few years, presenting it within a new framework, and also because its predictions for the future have – so far! – turned out pretty well.

There are many great Liberal Democrat blogs, but I find the most intellectual stimulation usually comes from blogs written by people with other political preferences – because a well argued post that makes a point you disagree with almost always forces clearer thought and a better understanding of an issue than a post which you instinctively agree with. Hopi Sen (for the political strategy) and Dizzy Thinks (for the newly unearthed facts) are two good examples of this. My interests in political reform tend to be well covered by the mainstream political blogs anyway, but for foreign affairs and defence issues I particularly like Kings of War and for digital and media issues Malcolm Coles and Martin Belam. For some lighter relief, novelist Christopher Fowler throws up a lovely eclectic mix of posts and Information is Beautiful is a mine of well presented data.

A belief that our country could and should be better governed.

How did you initially feel about the Liberal Democrats going into government with the Conservatives. Did you have any concerns about Party unity?

My initial feelings were of nerves and excitement. Nervous – because if things go wrong, the party could be set back years. Excited – because more Liberal Democrat policies have been implemented in the few months since than in the all the previous years of the party’s existence. The combination of being in government for the first time since 1945 and the surge of new members this year means the party is likely to go through major changes over the next few years. Melding the old with the new successfully will be a major challenge at all levels in the party.

Why the interest in being a working Peer, as opposed to becoming an MP?

To be a really good MP – or indeed councillor – you have to have a deep commitment to a particular, and relatively small, geographic area. However, my political passions are not geographically rooted in this way. They are more widespread – issues that apply to London in general such as the state of the London Underground, and issues that run across the whole country, such as political reform.

I’ve crossed Canada west to east by train, but would love to go south to north, up into the Arctic Circle.

My sister and her family live in Sydney. There’s little to beat the view as you go out into the Pacific between North and South Head, or the view as you sit on Circular Quay looking out at Sydney Harbour Bridgewith a book and a chocolate milkshake to hand.

I’ve not had a consistent view on this over the years, but currently I would say Earl Grey. He steered the party back into power after decades in the wilderness, got the Great Reform Act through Parliament (and past the monarch) and played a major role in ending the abomination of both slavery and the slave trade.

Nobel Prize winning physicist Richard Feynman isn’t a political figure but his approach to thinking about issues, his ability to create new ways of understanding information and his irrepressible sense of fun are all inspirations.

I find them generally enjoyable, but none stands out.

Barsby, as it’s the one I haven’t been to.

I don’t regularly buy a newspaper any more, getting my news instead online and from press cutting services. But the one that most often has long-form journalism that makes me think, makes me laugh and makes me feel better informed is the New York Times.

Books: Karel Capek’s War with the Newts (beautiful mix of satire, dark humour and science fiction), Robert Littell’s The Defection of AJ Lewinter (wonderfully elegant thriller that shows many a bloated author how to do precision with style) and Correlli Barnett’s The Desert Generals (historical debunking at its best).
Songs: James – Sit Down, The Beautiful South – Good as gold, UB40 – Sing our own song
Email Post
Labels: Mark Pack Twenty Questions to a Fellow Blogger