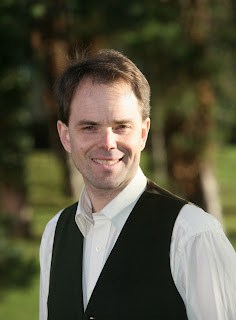 Dr. Rupert Read (born 1966) is Reader in Philosophy at UEA specialising in environmental and political philosophy; he is one of the 21 Norwich Green Party Councillors; and he is a blogger writing regularly on sites such as Liberal Conspiracy, Left Foot Forward, Open Democracy, Le Monde Diplomatique, and the Guardian, as well as at Rupert’s Read. His most recent books are PHILOSOPHY FOR LIFE and THERE IS NO SUCH THING AS A SOCIAL SCIENCE. He came within 1% of winning a first European seat for the Green Party in the East of England, in 2009, and also scored the Green Party’s highest-ever result in a Parliamentary byelection, in Norwich North, later that year. His blog can be found here.
What made you decide to start blogging?The desire to reach my potential voters without mediation.

What is your best blogging experience?
Perhaps the time when I scooped the BBC and everyone else, by revealing, days earlier than government had intended to reveal it, that the Coalition are planning to hold the AV referendum on the first Thursday in May 2011: http://www.leftfootforward.org/2010/07/av-referendum-to-be-announced-next-week-held-in-may/ . The blogosphere increasingly 'gets there first', and its fun when one can be the one who makes that happen...

And your worst?My worst experience is probably looking back on some really old/early posts from time to time and thinking ‘Jeez, I sounded a bit stiff back in that one', or the like. Plus the time I got threatened with legal action because of a poorly (sarcastically and over-concisely) titled blogpost...

What do you regard as your best blog entry?
I'm pretty proud of this one: http://liberalconspiracy.org/2010/10/07/three-reasons-why-the-child-benefits-fiasco-could-be-a-tory-master-stroke/ And just last week, this one: http://rupertsread.blogspot.com/2010/10/stopping-slavery-and-stopping-climate.html

Favourite blogs?
At the moment, I'm enjoying http://brightgreenscotland.org/ a lot. I'm also pretty excited about this joint-blog on reframing, run by myself and Matt Wootton:http://www.greenwordsworkshop.org/ . But really, my favourite 'blog' is the Twitter Home page: it's the metablog of our time...

What inspired you to go into politics?
The desire to change the world around me, the desire to do good for other people and beings around me and as yet unborn, to be able to represent what they want. To be able to help people in one of the most underated jobs in the world. Yes it’s hard work and sometimes you can get home and your legs can be like lead (not to mention your brain), but one can always find the strength to carry on with the knowledge that one is slowly but steadily managing to change the world, one step at a time. I want to leave a habitable and flourishing world behind for my nephews and nieces and for everyone; I want this very badly.

In what ways are the Greens more than a single issue Party?
It is most certainly a common misconception that the Greens are a single issue party and it is an obstacle that one comes across many times on the doorstep, an obstacle fed by continuing media stereotyping. The truth is that The Green Party have a policy on pretty much everything you could think of. We have extremely viable policies for instance on one of the most pressing problems facing us currently, one which the Conservatives are handling particularly badly, the current financial situation. Basically, one or more of the big banks needs to be permanently nationalised, and the rest of the system needs to be helped to (re-)mutualise. Here is how I've argued the case in blogland: http://rupertsread.blogspot.com/2009/07/bank-of-britain-proposal.html . I'm proud to say that, at our September Party Conference, an amendment to our policy was accepted which makes roughly this into Green Party policy.
As well as the banking system we have a variety of innovative policies on Pensions, Housing, Unemployment and many more: see our manifesto, here:http://www.greenparty.org.uk/policies.html. Long ago, the Green Party's predecessor, the Ecology Party might have been thought of merely as a single issue party (though of course that would have been a complete mistake even then, as our emphasis has always been wholistic, as the ecological label means), but as everything does, we have evolved and grown, to be a real power in politics.

What is the best thing and the worst thing about being a councillor?Best thing: The chance to make a difference. I am immensely proud for example of the 20mph speed limits in a large chunk of my own ward and of two other wards in Norwich. These would not have happened, without me.
Worst thing: Certain people from a certain disreputable Party lying about you and smearing you, for partisan reasons.


Is there anywhere abroad which you haven't been to, that you would like to visit?Bulgaria and Rumania. It’s on my 'gap year' list, if I ever get a gap year.
Is there anywhere abroad you have visited, that you would love to revisit?Ireland. The whole country has a somewhat magical feel to it. I'll never forget my time for instance in those stunning peninsulas south-west of Cork. I'd also love to return to Northern Ireland, where I had a fascinating (and terrifying) time as an amateur student reporter, back during the Troubles.


Who, excluding the present leader, do you regard as the best out of past leading figures in the Green Party?Interesting question! I'm inclined to plump for the great Mike Woodin, like me a Balliol man, and someone who should have been in the Cabinet or something, rather than dying tragically young. He was a truly inspirational thinker and speaker, and I'm proud to have known him, albeit far too briefly.


Which political figure has been your greatest inspiration?Petra Kelly. When I met her while at Oxford, she struck me as a true model for a politician / for a statesman (stateswoman), because of the way she exuded integrity.

Favorite Doctor Who?Tricky for a different reason: there are too many great ones! But for me at the end of the day it still has to be Tom Baker. "I am a timelord, I walk in eternity!" No-one could say that like he did.


Chocolate, vanilla, or mint?Mint of course.


Which Band, past or present, would you most like to see in concert?I saw Radiohead before they were famous. Amazingly, they weren't very good! If I could go back in time, I would love to see the Floyd in concert in the late 60s and early 70s.

In terms of visiting for the weekend, Oxford, Cambridge, or Barsby, Leics..?I would go for Cambridge. The architecture! But of course I am very fond too of Oxford, from my days studying and learning politics there. Both places also have great Green Councillors!  ;-)


What would you say your hobbies were?Gardening. And laughing at LibDem graphs.


And what would you say were your three favourite songs and three favourite books (bar the Bible and The Complete Works of Shakespeare)?Songs:
Yes, Anastasia - Tori Amos
Souvenir of China - Jean Michel Jarre.
The world turned upside down - the great song about the Diggers...
Books:
Wainwright's pictorial guides to the Lakeland fells
Philosophical Investigations - Wittgenstein
Ancient futures - Helena Norberg-Hodge.
Email Post
Labels: Rupert Read Twenty Questions to a Fellow Blogger