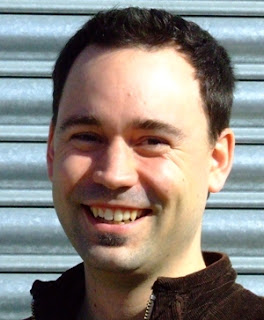 Gillan Scott: I live in Suffolk and am currently a teacher, a husband and a father. In the past I’ve been a youth worker, worked for RBS and trained as an architect. I’m also a Christian trying to live a life that makes a difference. I have a keen interest in politics, but have never quite managed to align myself with one political party. I believe that the Church has got a huge amount to offer society and the more it can move beyond its own walls and serve our communities and government, the better. The aim of my blog, God and Politics in the UK is to comment on current affairs from a Christian perspective and grapple with how Christians in the UK should engage effectively with issues in society

I got the idea during the Occupy demonstration outside St Paul’s last year. I was incredibly frustrated by the way the cathedral handled the incident, so I went online to see what other Christians were saying about it. I was disappointed about how little I found and felt the need to do something about it to get my voice out in public. I admire Christians who are involved in politics, whichever party they belong to, but I also know plenty of Christians who care deeply about politics but don’t feel drawn towards one particular party. I have this hope that my blogging might encourage at least a few to consider how they can act in a way that engages with politics effectively no matter what their political persuasion is.

The kindness of strangers. I’ve been amazed how supportive seasoned bloggers have been to me. I’ve had plenty of help getting up the first few steps of the blogging ladder since I started.

The niggling self doubt that makes me wonder why anyone would be interested in what I write. That and thinking I’ll run out of things to say sooner rather than later.

I’ve just finished a series of reviews of the Clearing the Ground report published by the All Party Parliamentary Group, Christians in Parliament. It’s a major report considering how Christianity is being marginalised in the UK and what should be done about it. It’s received quite a bit of interest, which is good to see.

Archbishop Cranmer and Mars Hill are two great blogs mixing Christian principles and politics effectively from different ends of the political spectrum. I’m still looking for a Christian Lib Dem blog. I closely follow eChurch and Gentle Wisdom which are full of great thought provoking content. I don’t have time to read as many as I’d like to.

What do you see as the major problems for Christians within the current political climate?

I think Christians are currently going through a crisis of confidence trying to match their beliefs with an increasingly secular society. Often you get the impression through the media that militant atheists and secularists are gaining control and influence in government and the church is losing its relevance. The danger is that Christians retreat into the safety of their churches where they can express themselves freely. In fact the opposite is needed. Christianity has contributed a great deal to this country over the centuries giving us a great deal of freedom and stability. Despite what some people think, we need the church to be engaged if we are to function well as a society.

Are some of the former and current Church leaders over-reacting over Gay marriage?

There is an ongoing demand on the church at the moment to conform to a secular vision for it. On the whole church leaders in our country have generally not made a big noise against changes in attitudes in society and government. I think the underlying unease in the church has continued to grow though, and we are now seeing some of this being vented in public. Marriage is an institution that the Church holds sacred and it is not going to allow it to be tampered with without a big fight. Many leaders in the church believe the government is going a step too far over this matter. It does sadden me though when I see Christians using incendiary language. This doesn’t do anything but stir up further resentment and division

Should Christians be more concerned about what is going on within the Media with regards to the phone-hacking scandal and should they be more pro-active in taking a stand?

I think Christians have been too quiet on this matter so far especially those with public profiles. The Church doesn’t always have a particularly easy relationship with most of the press and media and I wonder if it feels uncomfortable wading into the debate. I’m not sure how the press would react if there was an overwhelming response from those in the Church to the Leveson Inquiry calling for the police, politicians and journalists to clean up their act, but I’d like it to happen. The press has immense power to change public opinion and attitudes in a positive way, but instead it often leeches out poison instead.

I’ve not made it to Italy yet even though there’s so much I love about it.

I’ve been to Africa a few times now. Most of it is incredibly beautiful and I’m keen to return again at some point.

Nelson Mandela. He is a living example of how forgiveness and reconciliation can transform a broken country.

Which Christian figure has been your greatest inspiration?

There are plenty for me to choose from, but I’m going to say Mike Pilavachi. Mike heads Soul Survivor, which runs a massive festivals for young Christians in with thousands attending each summer. Through him a whole generation of Christians has grown up in this country confident in their faith and eager to transform the world by fighting against injustice, serving the poor and living with integrity. I’ve met him a few times and he is an amazing guy, although his dress sense leaves a lot to be desired.

Daniel Craig’s Casino Royale. It brought the franchise back to life.

I grew up with Peter Davison, but Tom Baker is my favourite. You always got the impression that he actually believed he was Doctor Who.

I’d love to have been able to witness the Jimi Hendrix Experience at Woodstock in 1969.

I studied Architecture at university, so I’d go with Cambridge as it has some fantastic buildings.

I’m in a couple of bands and try to write songs occasionally. I love art and also have a rather large LEGO collection.

Where the Streets Have No Name, by U2, Viva La Vida by Coldplay and History Maker by Delirious? All best heard live. Books in no particular order: Lord of the Rings, The Complete Winnie the Pooh Collection and Homer’s Iliad.

Peter Kirk said…
Gillan, thanks for mentioning my blog Gentle Wisdom. Sorry for the shortage of thought provoking content recently. And you really must visit Italy!
12:44 PM

Discovered your blog earlier thru Gillan's post on marriage, and well chuffed to have found you.

Got you in my reader now and following with interest.